Ginsburg’s colleagues voted 6-3 to allow the Texas law to remain in effect for the upcoming election. But as she observed in a scathing dissent issued Saturday, the measure may prevent more than 600,000 registered voters, or 4.5% of the total, from voting in person for lack of accepted identification. “A sharply disproportionate percentage of those voters are African-American or Hispanic,” she wrote 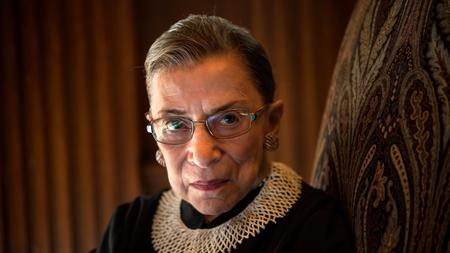 This article gives background information on Sam Cooke’s motivation in creating, A Change Is Gonna Come. In the midst of the Civil Rights struggle and desegregation, our artist continued the tradition of slave hymns and field songs, ushering in hope through the darkest of times. #OYRchallenge.

On the surface, “A Change is Gonna Come” doesn’t sound particularly challenging, especially in light of the defiant freedom songs that rocked the movement in 1964, “Ain’t Gonna Let Nobody Turn Me ‘Round” or “I Got My Mind Stayed on Freedom.” The song was finally released as a single in late December of that year, shortly after Cooke’s untimely death. It quickly became one of the anthems of the movement and music historian Dave Marsh said that “A Change is Gonna Come” “ranks with Martin Luther King’s best speeches as a verbal encapsulation of the changes black perspective underwent in the Sixties.”

Despite surface appearances, African-American teenagers and movement activists knew exactly what it meant. The lyrics speak of a universally understood sense of alienation in their own land, of being treated as second-class citizens, of asking for help — and not receiving it, even from their own people. And like the great protest spirituals, even when recounting the grossest injustices, the singer continually returns to the hope, the expectation of justice: “Oh, there been times that I thought I couldn’t last for long/But now I think I’m able to carry on/It’s been a long, a long time coming/But I know a change is gonna come, oh yes it will.”

via Tragedy and Art: The Power of Sam Cooke’s ‘A Change Is Gonna Come’ | Robert F. Darden.

WASHINGTON (AP) — The Obama administration and civil rights groups are defending a key section of the landmark voting rights law at the Supreme Court by pointing reformed state, county and local governments to an escape hatch from the law’s strictest provision.

The Voting Rights Act effectively attacked persistent discrimination at the polls by keeping close watch, when it comes to holding elections, on those places with a history of preventing minorities from voting. Any changes, from moving a polling place to redrawing electoral districts, can’t take effect without approval from the Justice Department or federal judges in Washington.