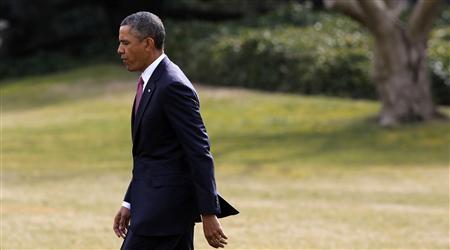 (Reuters) – President Barack Obama plans to meet with several Republican senators for dinner on Wednesday as part of his effort to revive talks to tackle the nation’s long-term deficit, a congressional aide confirmed.

via Obama to meet with Republican senators over budget | Reuters. President Barack Obama on Monday called on the nation’s governors to lobby their respective congressional delegations to prevent the looming sequestration cuts set to kick in Friday.

At the annual gathering of the National Governors Association, Obama urged the bipartisan group of state executives to review the state-by-state reports issued by the White House Sunday outlining how the more than $1 trillion in across-the-board cuts would affect their constituents. Obama also addressed state and federal partnerships in infrastructure and education.

Barack Obama is widely known as the United States’ first black president. But is he really the country’s first African-American commander-in-chief?

via ‘Black Presidents’: 6 United States Commanders In Chief Before Obama.

Sasha Breger Bush: In the name of democratizing finance, derivative exchanges are achieving the opposite

President Obama and Christopher Dorner. One is Commander-in-Chief of the most powerful nation on earth. The other is Public Enemy Number One.

As one stood before a thousand cameras, his image flashing across 70 million television screens, the other was holed up in a cabin on the other side of the continent, hundreds of police streaming to the scene.

via Barack Obama, Christopher Dorner and the True State of the Union • Africanglobe.net.

Speaking about improving the voting experience for citizens, President Barack Obama tells the story of Desiline Victor, a 102-year-old Floridian, who waited more than six hours to vote.

the State of the Union address is yet another occasion to bask in Obama’s glow, to feel, vicariously, at the center of the world stage, to rally once more around the Icon-in-Chief. It is the antithesis of independent Black politics – of serious politics of any kind – and renders the Big Four-Plus useless at every crucial juncture and all points in between. For all other groups, the State of the Union address is a barometer of a president’s commitment to the interests of their constituency – stated for the world to hear and see. But, for the Black Misleadership Class, it is just another chance to swell with pride at the sight of all those white folks summoned to sit in rapt attention to a Black man’s voice.

via Why Nobody’s Paying Attention to Black Folks These Days, Including Our So-Called Leaders | Kulture Kritic.

With Obama’s proposals only a hazy shade more inclusive than the Senate’s plan, and with the inevitable back room dealing and negotiating already underway, is there any room for everyday people who aren’t lobbyists and professional activists to insert themselves?

via Wanna Get Involved in the Coming Immigration Reform Fight? Here’s How.

Does the Obama administration have to be held accountable for the reversal of the many systems, that have been strategically put in place over the course of hundreds of years, and are now negatively affecting minorities, women and other vulnerable groups? Of course! That having been said though, it is important to recognize that holding any administration accountable has to be done along with other actions that people take by themselves, for themselves.

Warning of grave economic consequences if a package of automatic spending cuts takes effect in coming weeks as part of the sequester, President Barack Obama Tuesday urged Congress to pass a short-term package of spending cuts and to close tax loopholes.

“If they can’t get a bigger package done by the time the sequester is scheduled to go into effect, then I believe they should at least pass a smaller package,” Obama said at the White House. “There is no reason that the jobs of thousands of Americans who work in national security or education or clean energy—not to mention the growth of the entire economy—should be put in jeopardy.”

via OBAMA: ECONOMY WILL SUFFER FROM SEQUESTER | POLITICO.