THOUSANDS of people plead guilty to crimes every year in the United States because they know that the odds of a jury’s believing their word over a police officer’s are slim to none. As a juror, whom are you likely to believe: the alleged criminal in an orange jumpsuit or two well-groomed police officers in uniforms who just swore to God they’re telling the truth, the whole truth and nothing but? As one of my colleagues recently put it, “Everyone knows you have to be crazy to accuse the police of lying.”

via Why Police Officers Lie Under Oath – NYTimes.com. 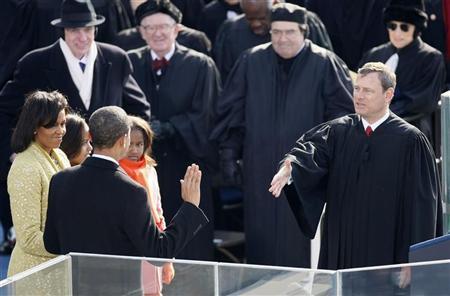 (Reuters) – Four years ago, John Roberts blew it. In his debut at swearing in the next president, the Supreme Court chief justice stumbled over the oath at Barack Obama’s inauguration ceremony.

That led Obama to mix his words up too and the historic swearing-in of the first African-American president briefly became an awkward muddle.

To silence doubts that Obama’s presidency might not be legal because he failed to say the oath properly, the two men tried again the next day in the White House and went through the correct, constitutionally mandated avowal, word for word.

via After fumbled oath, Roberts and Obama leave little to chance | Reuters.